Khosrow and Shirin (Persian: خسرو و شیرین‎), is the title of a famous Persian tragic romance by the poet Nizami Ganjavi (1141–1209) who also wrote Layla and Majnun. It recites a highly elaborated fictional version of the story about the love of the Sasanian king Khosrow II and the Armenian princess Shirin, who becomes queen of Persia. The essential narrative is a love story of Persian origin which was already well-known from the great epico-historical poem the Shahnameh and other Persian writers and popular tales, and other works have the same title.

Variants of the story were also told under the titles “Shirin and Farhad” (Persian: شیرین و فرهاد). 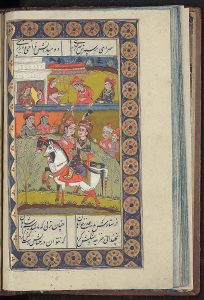 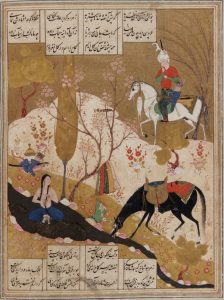 Nezami’s version begins with an account of Khosrow’s birth and his education. This is followed by an account of Khosrow’s feast in a farmer’s house; for which Khosrow is severely chastised by his father. Khosrow asks for forgiveness and repents his offence. Hormizd IV, who is now pleased with his son, forgives him. That very night, Khosrow sees his grandfather Anushirvan in a dream and Anushirvan gives him glad tidings of a wife named Shirin, a steed named Shabdiz, a musician named Barbad, and a great kingdom, that is Persia.

Shapur, Khosrow’s close friend and a painter, tells Khosrow of the Greece queen Mahin Banu and her niece Shirin. Hearing Shapur’s descriptions of Shirin’s flawless features, the young prince falls in love with Shirin, the Armenian princess. Shapur travels to Armenia to look for Shirin. Shapur finds Shirin and shows the image of Khosrow to Shirin. Shirin falls in love with Khosrow and escapes from Armenia to Khosrow’s capital Mada’in; but meanwhile, Khosrow also flees from his father’s anger and sets out for Armenia in search of Shirin.

On the way, he finds Shirin unclothed bathing and washing her flowing hair; Shirin also sees him; but since Khosrow was traveling in peasant clothes, they do not recognize one another. Khosrow arrives in Armenia and is welcomed by Shamira the queen of Armenia – yet he finds out that Shirin is in Mada’in. Again, Shapur is sent to bring Shirin. When Shirin reached Armenia again, Khosrow – because of his father’s death- has to return to Mada’in. The two lovers keep going to opposite places till finally Khosrow is overthrown by a general named Bahrām Chobin and flees to Armenia.

In Armenia, Khosrow finally meets Shirin and is welcomed by her. Shirin, however, does not agree to marry Khosrow; unless Khosrow first claims his country back from Bahram Chobin. Thus, Khosrow leaves Shirin in Armenia and goes to Constantinople. The Caesar agrees to assist him against Bahram Chobin on condition that he marry his daughter Mariam. Khosrow is also forced to promise not to marry as long as Mariam is alive. Khosrow succeeds in defeating his enemy and reclaims his throne. Mariam, due to her jealousy, keeps Khosrow away from Shirin. 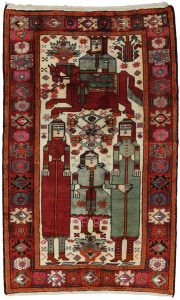 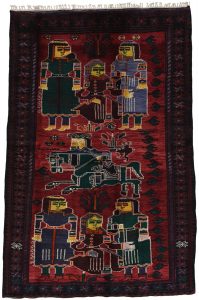 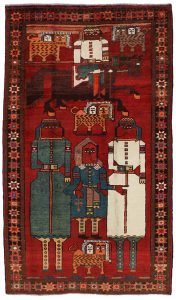 Meanwhile, a sculptor named Farhad falls in love with Shirin and becomes Khosrow’s love-rival. Khosrow cannot abide Farhad, so he sends him as an exile to Behistun mountain with the impossible task of carving stairs out of the cliff rocks. Farhad begins his task hoping that Khosrow will allow him to marry Shirin. Yet, Khosrow sends a messenger to Farhad and gives him false news of Shirin’s death. Hearing this false news, Farhad throws himself from the mountaintop and dies. Khosrow writes a letter to Shirin, expressing his regret for Farhad’s death. Soon after this incident, Mariam also dies. According to Ferdowsi’s version, it was Shirin who secretly poisoned Mariam. Shirin replies to Khosrow’s letter with another satirical letter of condolences.

Shirin eventually consents to marry Khosrow after several romantic and heroic episodes. Yet, Shiroyeh, Khosrow’s son from his wife Mariam, is also in love with Shirin. Shiroyeh finally murders his father Khosrow and sends a messenger to Shirin conveying that after one week, she would have to marry him. Shirin, in order to avoid marrying Shiroy, kills herself. Khosrow and Shirin were buried together in one grave.

We present below some carpet illustrations… 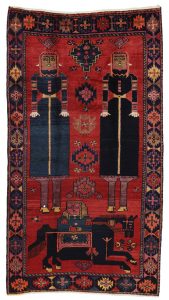 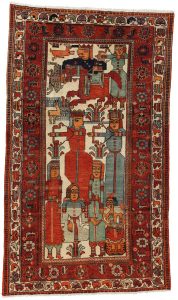