The women weave their kilims for three purposes: 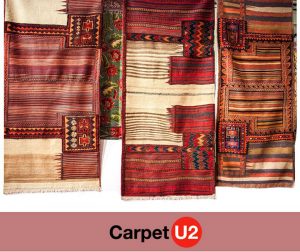 The kilims gain certain character in these different phases of a woman’s life.

Kiz means girl. A kiz-kilim is seen as something very extra as it is woven by a young girl before her marriage. She is supposed to express her dreams of her love in the patterns. You can hear many heart sobbing stories about these kind of rugs. One popular story goes like this.

One day a bay came to a tent and saw a kilim lying outside on the ground. He took the kilim with him and asked his men to find the father of the girl who had woven it. When his men had found the father he was brought to the bay who asked the father if the kilim had been woven by his daughter.

–   Why does your daughter have to marry against her will? Wondered the bey.

–   My lord, I am poor and a rich man has asked for her hand, answered the father. But how could you see that she loves another?

The bay told the father that he understood the girl’s message and promised to deliver both horses and camels to the father if he allowed his daughter to marry whoever she wanted. Finally he added:

A true story? Who knows. But we allow ourselves to be fascinated. And a kilim or a carpet always becomes more interesting if you suspect a message in the pattern.

Yellow –This is a colour that often fades with the passage of time. The colour is obtained from flowers such as cehri, dyer’s summach, dyer’s weed and buckthorn berries. Saffron is often mentioned in books on oriental rugs, but is very seldom used for the dyeing of wool for rugs. It’s too expensive.

Green-walnuts and leaves of olives give you green, as does the blending of yellow and blue agents. As yellow fades faster than blue, the result can be that green objects in a tapestry turn blue as time goes by.

Black – can be achieved in different ways. One is to dye a dark yarn dark blue. Black is also the result when a yarn with an iron sulphate-mordant is dyed with tannic acid-colours as acorn-cups, skin of the pomegranate and oak-apples.

Black, grey, white and brown are the natural colours of wool. Those nomads who lives in isolated areas with little water have made necessity into a virtue. The Baluchi nomads between Iran and Afghanistan have learned how to make exquisite patterns out of wool from sheep, goats and camels in their natural colours.