Oriental rugs: the meanings behind the designs

When one understands where a design has come from and what its symbols stand for, it becomes much easier to read. There was a time when the design of an Oriental rug told, with some degree of certainty, the country and city, village or district, where it was woven. The wider dissemination of designs, following greater commercial expansion at the beginning of the 20th century, means this is less true today. Older pieces, however, can still be ‘read’, offering fascinating insights into their history.

A pattern has three fundamental elements — a unit, repetition, and a system of organisation — which can be interpreted in a curvilinear or rectilinear manner. Carpet designs can either fill the entire field with one repeating motif, known as an ‘all-over design’, or be centred by a dominant medallion, around which the rest of the design is ordered. 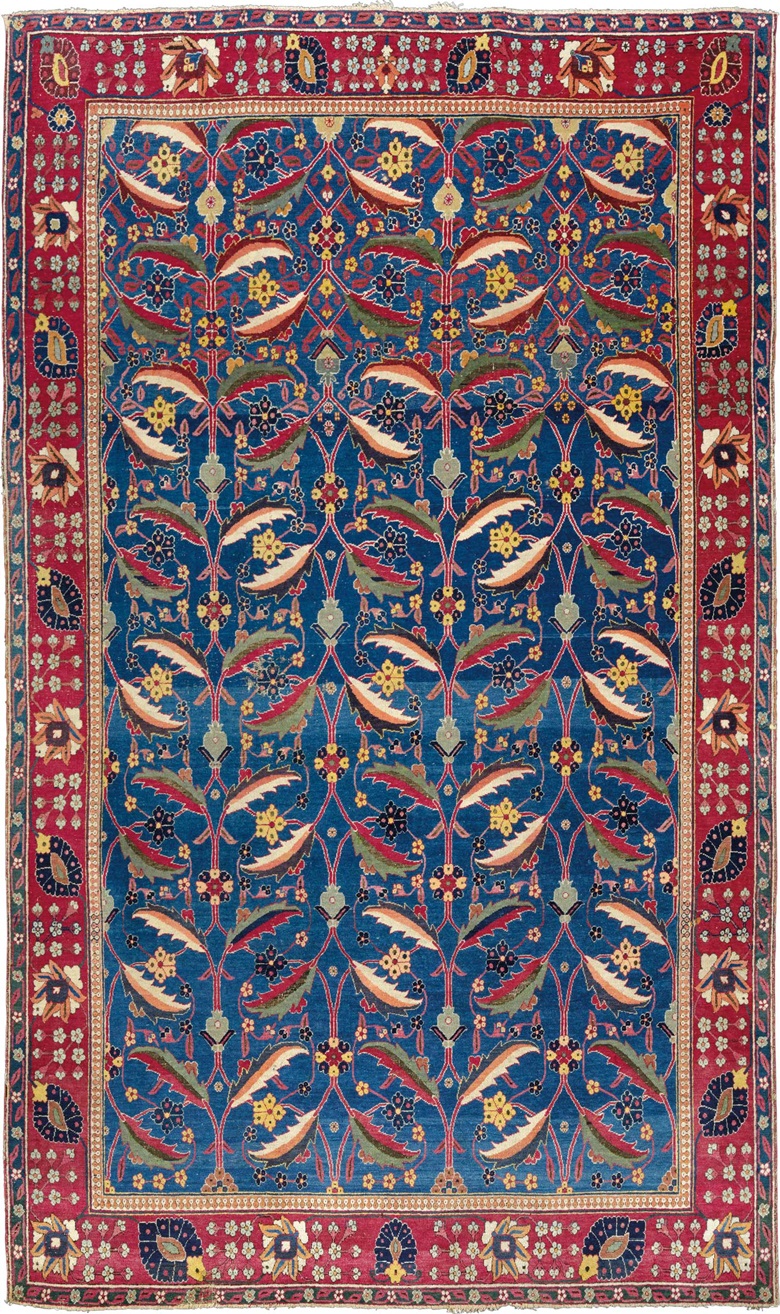 One of the earliest and most frequently encountered designs in carpet weaving is the herati pattern, which consists of a lozenge form with floral motifs at the corners, surrounded by lancet-shaped leaves, sometimes called mahi, or fish.

One can clearly see the beginnings of the herati pattern illustrated in the all-over design on this wonderful late-17th-century Kirman ‘Vase’ carpet from Southeast Persia, which once belonged to Baroness Alice de Rothschild. 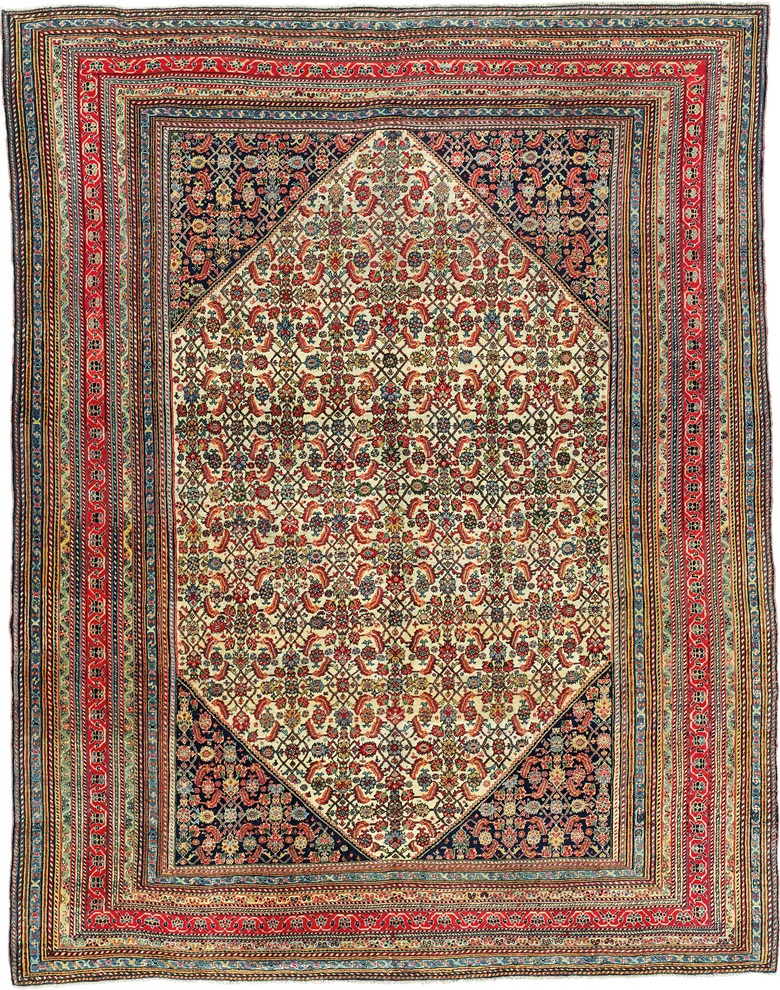 Later, the herati design continued to be used throughout the established weaving centres of Persia, as well as by nomadic tribes such as the Qashqai in South East Persia. Here, it is seen on a much smaller, tighter scale, as ‘all-over’ design within the ivory field, carried over into the corner spandrels.

Another pattern used in a repetitive ‘all-over’ manner was the harshang or ‘crab’ design that was first used in the Khorasan district in Persia, and in origin ultimately derives from the Isfahan ‘in and out’ palmette design — this is beautifully presented in this North West Persian kelleh (below left), which shows the crab-like palmettes with their open claws.

The ancient boteh motif was widely used throughout Persia and India. Also known as the ‘paisley’ or ‘pear’ motif, in Persian, boteh means a cluster of leaves, which could come from either the palm or the pine. Widely used by village weavers and nomadic tribes in their trappings, the pattern could be displayed in various directions and arrangements, in a curvilinear or rectilinear style.

Here, the boteh motif can be seen in the elaborate, interlocking band on a 19th-century trapping from a Central Asian tribe (below) and again, in the staggered, multi-coloured rows of this Caucasian, Akstafa runner (above right). 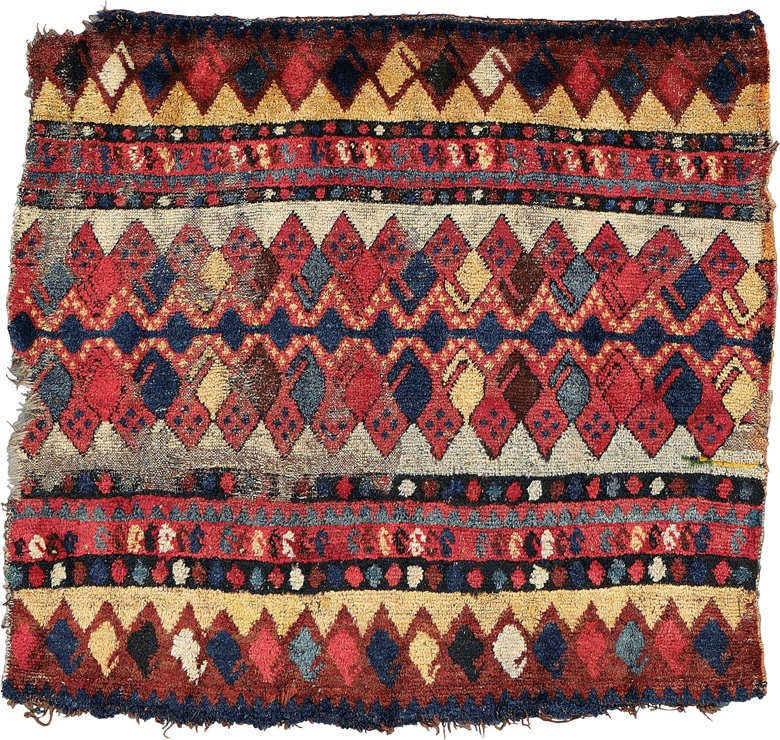 The use of a central medallion to create a symmetrical design stemmed from earlier 15th century Persian manuscript covers, but found its way into carpet designs in the 16th century. The classic early Tabriz medallion carpets of this period were synonymous with beautiful large-scale medallions, which overlaid or were enclosed by intricately drawn floral spiralling vine.

The medallion tradition has continued throughout the centuries, and is interpreted in both a curvilinear manner — as in many carpets woven in Tabriz — or in a more rectilinear style, as seen in the carpets of Heriz. Not only present in Persia, medallion designs were also widely found throughout Anatolia and the Caucasus, though here, were predominantly of strong, geometric form. 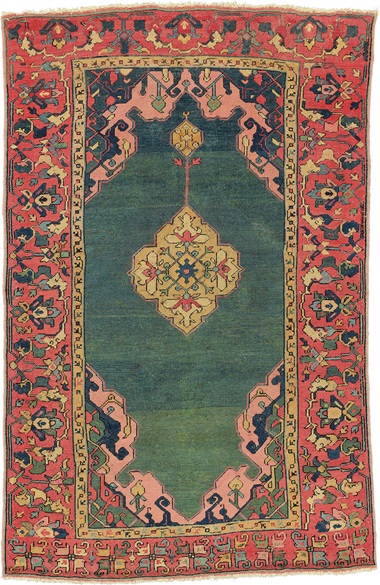 The medallion could be centred, as in this 17th-century Anatolian double-niche rug (above left), or used in a multiple arrangement, as illustrated by this 18th-century white-ground ‘Kuba’ long rug (above right), where three medallions are stacked on top of one another. 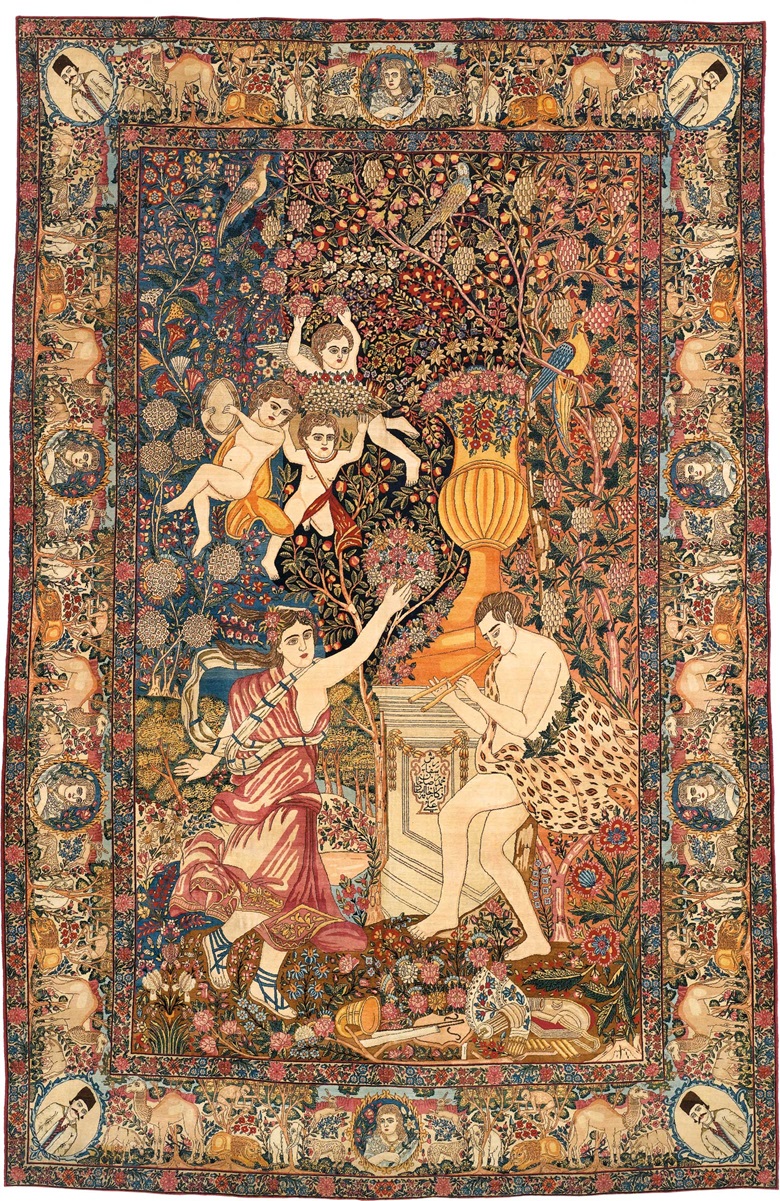 In the 18th and 19th centuries, some workshops moved away from abstract patterns, choosing instead to depict subjects taken from classical prose and poetry. Scenes of hunting, courtly life, or mythical subjects were woven in wool and silk, with more finely-woven carpets resulting in more intricate and accurate images.

The master weavers of Kirman were particularly adept at depicting intricate, naturalistic scenes, often looking to Western works of art for design inspiration. The pictorial carpet above is drawn directly from a Louis XIX Gobelin tapestry from the series Les sujets de la fable, after the drawings by Raphael. 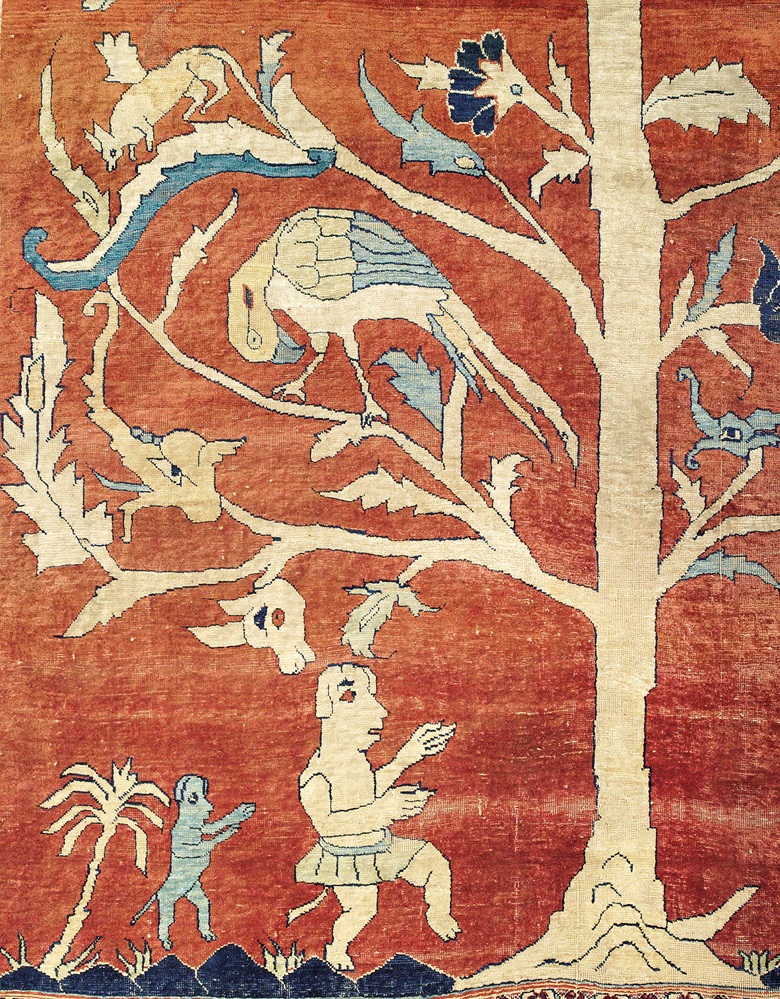 The fantastical and grotesque animals and birds that writhe together in this silk Heriz rug from Northwest Persia (above) are a variation of what is known as a waq-waq tree. The waq-waq is a Persian oracular tree originating from India, whose branches bear fruit with the heads of men, women or mythical animals. 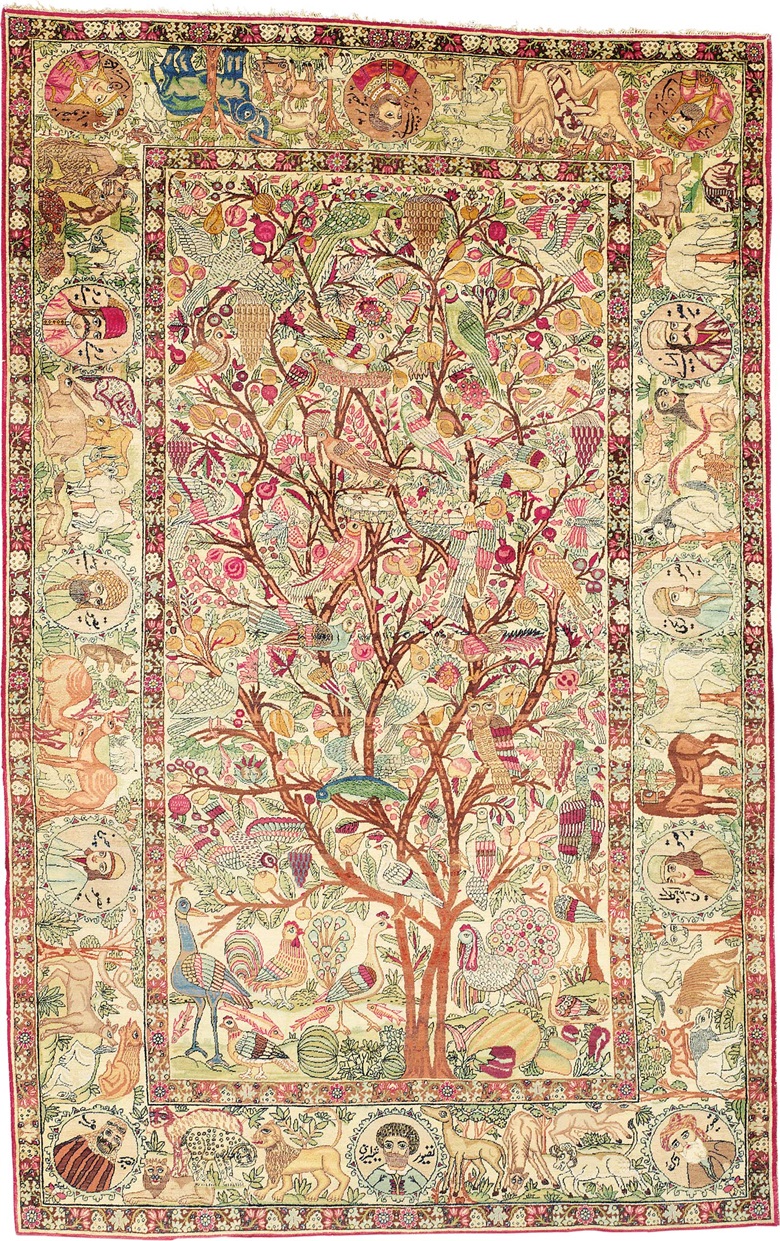 The image of the ‘Tree of Life’, as seen in the Kirman pictorial carpet above, represents eternal life and is an essential theme in mythology and religion. The trees grow from the base of the field and continue to fill the rest of the carpet with leafy branches that are filled with flowers or birds. Often, there will be a stream or pool at the foot of the tree with wandering animals — the tree itself symbolising the connection between heaven, earth and the underworld.