Discover the myth of Arachne, the spider woman

The offence to the gods

Arachne in Greek mythology, was a Lydian woman, thought by some to be a princess, who was highly gifted in the art of weaving. Born to Idmon, a famous dyer in Lydia, Arachne was no ordinary weaver and the very act of her weaving was sheer magic and a sight to behold. Soon news of Arachne’s artistry spread far and wide and it is said that nymphs from the forests left their frolicking and gathered around Arachne to watch her weave. So moved were they by her skills that they remarked that she surely must have been trained by none other than Goddess Athena, the goddess of weaving. 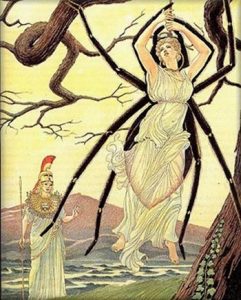 All this adulation was more than Arachne could handle and being an ordinary mortal who was quite vulnerable to human failings, she became quite arrogant about her superior skills. She was annoyed at being regarded as a pupil of Athena and began bragging about her skills, proclaiming herself to be far more superior to even Athena. Now, when the goddess of weaving heard of Arachne’s bold claims, she was upset, but nonetheless decided to give the young woman a chance to regret her folly. Disguised as an old woman, Athena appeared before Arachne and warned her of the consequences of provoking the wrath of the gods, but Arachne was not a bit remorseful and challenged Athena to a contest, declaring that if she lost, she would accept any punishment that Athena would decide for her. That time Athena revealed her true form and accepted the challenge. The stage was set for a battle in which a god and a mortal pitted their artistic skills to decide who the better artist was. The nymphs who had come to watch Arachne weave shrank back, horrified at Arachne’s audacity, but Arachne was unshakable and stood her ground. And so the contest began, Athena at her loom and Arachne at hers, each working with threads of gold and a splendid array of colors to decide who would outdo the other in this ultimate trial. What unfolded next was a feast for the eye. Athena created a tapestry replete with scenes from the history of the gods. She portrayed Zeus at the center of the Olympic pantheon as well as her own contest with Poseidon and her victory, which ultimately made the people of Athens name their city after her. At the corner of her tapestry, she artfully depicted humans who had dared to defy the gods and who had been punished without a trace of mercy. As for Arachne, she deliberately chose scenes that depicted the infidelities and amours of the gods. She vividly portrayed Zeus and his string of indiscretions. She showed how Zeus had turned into a swan to rape the Spartan queen Leda; a bull to entice Europa; an eagle to abduct Aegina; as a shower of gold to seduce Danae; and as a satyr to seduce Antiope. Arachne’s work of art, according to the Latin narrative, featured twenty-one scenes of the various misdemeanors of the mighty gods, including Poseidon, Apollo, Dionysus and others.

The transformation into a spider

Although Arachne had shown little respect for the gods by choosing a subject that made a mockery of the supreme deities of the Olympus, even Athena had to admit that her work was brilliant and flawless. That, however, was not enough to calm down Athena who was incensed by Arachne’s humiliating portrayal of the gods. At last, Athena destroyed in anger Arachne’s tapestry and loom. Arachne, like many other foolish mortals, had dared to question the supremacy of the gods. She had, in her arrogance over her art, been blind to the consequences of challenging the gods. Still in anger, Athens transformed Arachne into a disgusting insect. She turned her into a spider (“arachni” in Greek), proclaiming that Arachne and all her descendants would henceforth hang forever from threads and be skillful weavers. An interesting fact that relates myth to history is that the art of weaving is said to have originated in Anatolia, a part of modern Turkey and spiders have been a constant source of inspiration for man to perfect his weaving skill. The story of Arachne from Greek myhology has also been immortalized by science and the taxonomical class name for spiders is Arachnida.