Specialist Louise Broadhurst gives six tips for would be carpet-collectors, from identifying natural dyes, to finding the right setting on your vacuum cleaner — with lots from our upcoming Oriental Rugs and Carpets auction in London

Carpets have been collectors’ items for centuries: we know from inventories that Henry VIII owned several hundred Turkish rugs, some of which appear in his many portraits by Hans Holbein — the paintings preserving the memory of objects which have nearly all since disappeared. Keen Persian rug collectors included Cornelius Vanderbilt and Sigmund Freud, who kept a rug draped over the couch where he saw his clients.

1. Get to know your knots, warps and wefts 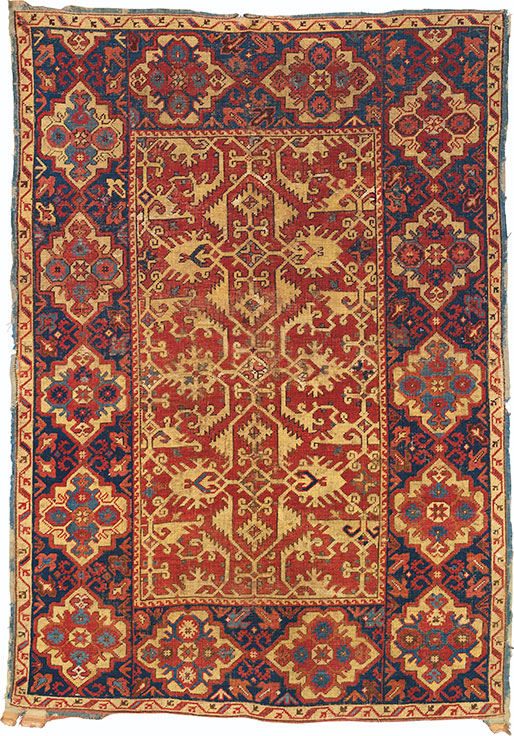 A ‘Lotto’ rug, Probably Ushak, West Anatolia, First half 17th century. Estimate: £10,000-15,000. This rug is offered in our Oriental Rugs and Carpets auction on 6 October at Christie’s London

Antique Oriental rugs were woven on a traditional loom with strands of cotton, silk or wool, called warps, stretched vertically between two wooden horizontal beams. The weaver then passed rows of silk, cotton or wool, called wefts, in alternation over and under each adjacent warp. The warp and the weft constitute the basic foundation of most carpets. The weaver then repeatedly introduces rows of looped ‘knots’ in between several wefts that are then uniformly clipped to produce the pile. The higher the number of knots the finer the rug will be and the more intricate the pattern will become. This technique proved so effective that little has changed and carpets are made using these same methods today.

2. A carpet can capture its place of production

Most carpets and rugs are classified by the surroundings in which they were woven — whether hand woven upon the small loom of a nomadic tribe, part of a cottage industry within a local village, or produced in a professional or Royal workshop within a city.

Royal carpets: Made in the 16th and 17th century for the Islamic courts, Royal carpets had the greatest influence of all on carpet design, though relatively few survive today. (See the mid-17th century Comtesse de Behague Vase carpet that sold for £6,201,250 on 15 April 2010 at Christie’s London)

Tribal carpets: Nomadic, or tribal carpets, like the Kurdish rug below, are produced by different ethnic groups; predominantly woven for their tribe’s own use, rather than as commissions or to be sold, their designs are a reflection of distinct tribal histories and traditions. Whilst the carpets could be as long as they wished, the width of their rugs could never exceed eight foot, the standard size of the loom. 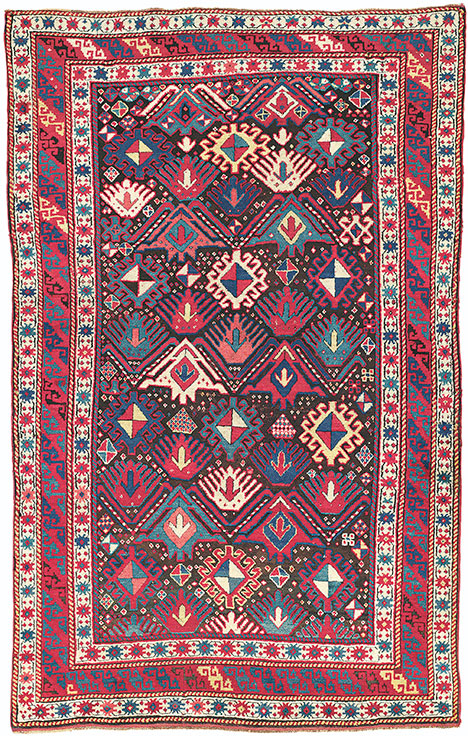 A Kurdish rug, South Caucasus, circa 1890. Estimate: £4,000-6,000. This rug is offered in our Oriental Rugs and Carpets auction on 6 October at Christie’s London

Village carpets: Carpets like the one below were produced in settled environments: the loom was erected within the home and the carpets woven without a drawn design, relying on the memory of the women who wove them. This strategy meant that each of the carpets contained small idiosyncrasies, both in their construction and pattern — a factor which only adds to their charm. Upon completion, carpets were taken to the nearest regional market, where they would carry the name of that village. Here, they would either be sold to locals, or handled by a merchant for export.

Town carpets: Cities such as Tabriz, Heriz and Kashan (see example below) are synonymous with carpet weaving. In the last quarter of the 19th century workshops were established specifically to meet the demands of the Western market, with master weavers overseeing the production of finely woven rugs and carpets. One of the most famous workshops in Kashan was that of Hajji Mollah Hassan Mohtasham, whose carpets are recognisable by the harmony of their design and colouring, the purple silk finish of the selvedge (the material binding each side cord) and the maker’s consistent use of the very best wool, which contained a particularly high quantity of lanolin. 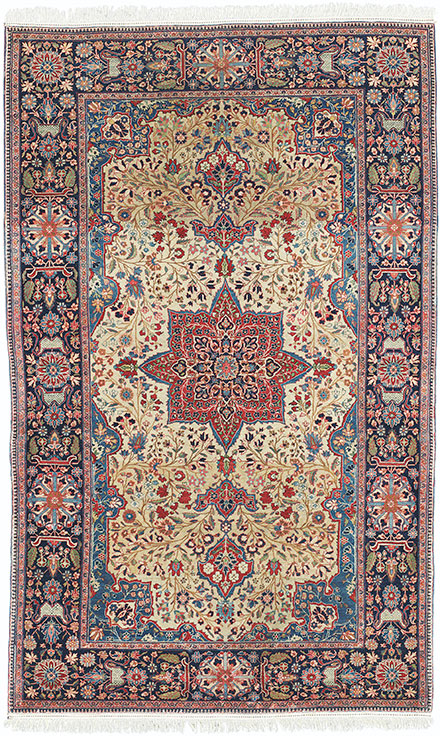 A Kashan ’Mohtasham’ rug. Central Persia, circa 1890. Estimate: £7,000-10,000. This rug is offered in ourOriental Rugs and Carpets auction on 6 October at Christie’s London

Ziegler: By 1883, European demand for Persian carpets had grown so great that the Manchester based firm Ziegler and Co (see below) opened its first factory in the district of Sultanabad, West Persia. 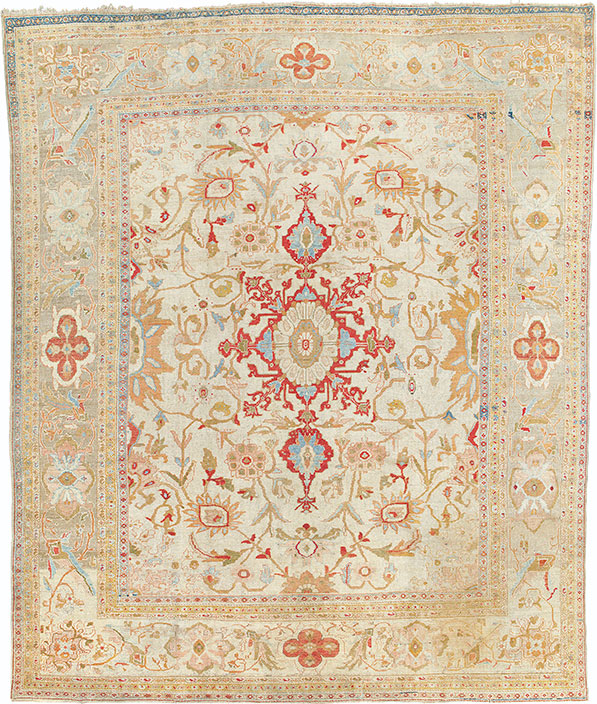 A Ziegler Carpet. Sultanabad District, West Persia, circa 1890. Estimate: £12,000-18,000. This rug is offered in our Oriental Rugs and Carpets auction on 6 October at Christie’s London

3. Look for harmonious designs, with a movement and balance 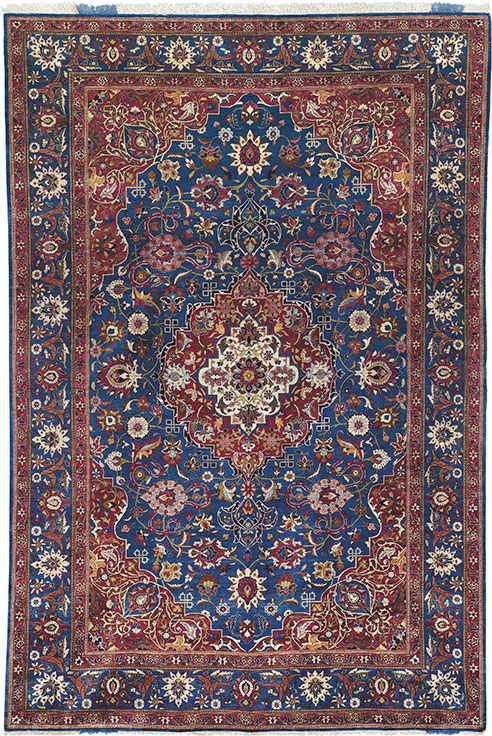 A silk Kashan carpet, central Persia, circa 1900. Estimate: £20,000-30,000. This rug is offered in ourOriental Rugs and Carpets auction on 6 October at Christie’s London

A massive Lahore carpet, North India, circa 1930. Estimate: £20,000-30,000. This rug is offered in ourOriental Rugs and Carpets auction on 6 October at Christie’s London

Perhaps one of the most important aspects to consider when buying a carpet is its design. Is it balanced, well-spaced and harmonious? Does it have a sense of movement, spatial depth and clarity?  If these elements are lacking then very often the design may have been misunderstood and one is left with a carpet that is visually not that beautiful.

On the silk Kashan carpet shown above and left, the design is clearly centred by a lobed medallion which is enclosed, but not crowded, by a palmette and cloud-band scrolling vine. The cornflower blue field draws you deeper as it hides behind the cusped spandrels — the ornamental decoration within each corner of the field, which resemble sweeping curtains — revealing another plane beneath. The whole carpet is framed by a well-spaced, decorative border, that brings perfect balance to the overall scheme.

Some designs have been used repeatedly throughout the centuries in various guises.  Early 16th and 17th century Safavid designs have proved particularly popular, such as the ‘Vase’ design of south east Persian Kirman carpets which is re-interpreted in the impressive Indian Lahore carpet shown above, right. 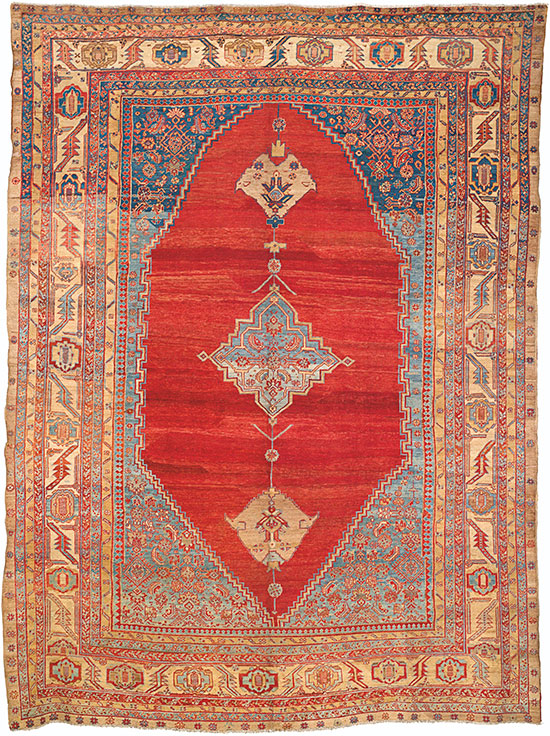 A key advantage when buying an antique carpet is its use of hand spun, naturally dyed yarns, the subtleties of which cannot be reproduced by synthetic dyes. Synthetic dyes began to be used in around 1860 and many collectors disregard carpets woven after this point as the colours fade with time and fail to have the soft hues and nuances of natural dyes.

Certain colours are considered rarer than others and are actively sought after such as Tyrian purple, saffron yellow, cochineal rose and certain shades of green. A tell-tale sign of whether or not a carpet is woven with naturally dyed wool is if it includes tonal changes within a certain colour forming visible bands called abrashes. These occur as each batch of dipped yarn has a marginally different saturation of dye.

5. Be smart when carrying out care or restoration

A Ningxia Pillar carpet, North China. Estimate: £8,000-10,000. This rug is offered in our Oriental Rugs and Carpets auction on 6 October at Christie’s London

As with any work of art, antique carpets require a certain amount of care and attention. Generally speaking, the earlier the rug was woven, the more wear and restoration is accepted, as collectors place less importance on the condition and more on its rarity and artistic merit. If a rug has been over restored however, or restored to a poor standard, this can have a negative impact on the overall appearance and value of a carpet. Chemical washing, extreme sun-fading, staining or a reduction in size are all key aspects to be aware of, as they are often irreversible and will inevitably affect the rugs’s value.

Silk fibres are much more fragile than wool and as a result are more prone to wear. They are also susceptible to humidity and if they become wet and dry incorrectly the foundation will become dry and brittle and splits will begin to appear. If an antique carpet has been cared for well, however, it can last for years — much more so than a lesser quality modern rug which is part of a mass commercial production.

It is important to regularly clean a carpet. This can be done with a light setting on a domestic hoover or if it requires a more thorough clean then it should be handled by a professional carpet cleaner. Before storing carpets, roll them from the bottom, pile facing inwards. When storing a silk carpet roll it with the pile on the outside as this places less strain on the foundation. Never fold a rug or carpet as this will cause it to crack over time. Insect damage, flooding or mildew damage are the most common problems we see when a carpet has been poorly stored so it is important to check on them regularly.

Whatever type of carpet one is collecting, whether it be early fragments, tribal trappings or decorative floor coverings, the enjoyment of collecting should be paramount.