LONDON — Howard Hodgkin, the British painter who died in March at the age of 84, was famous for daubing his canvases with strips and patches of raw color: from translucent blues and greens to deep shades of ocher and vermilion. His paintings were essentially nonfigurative. 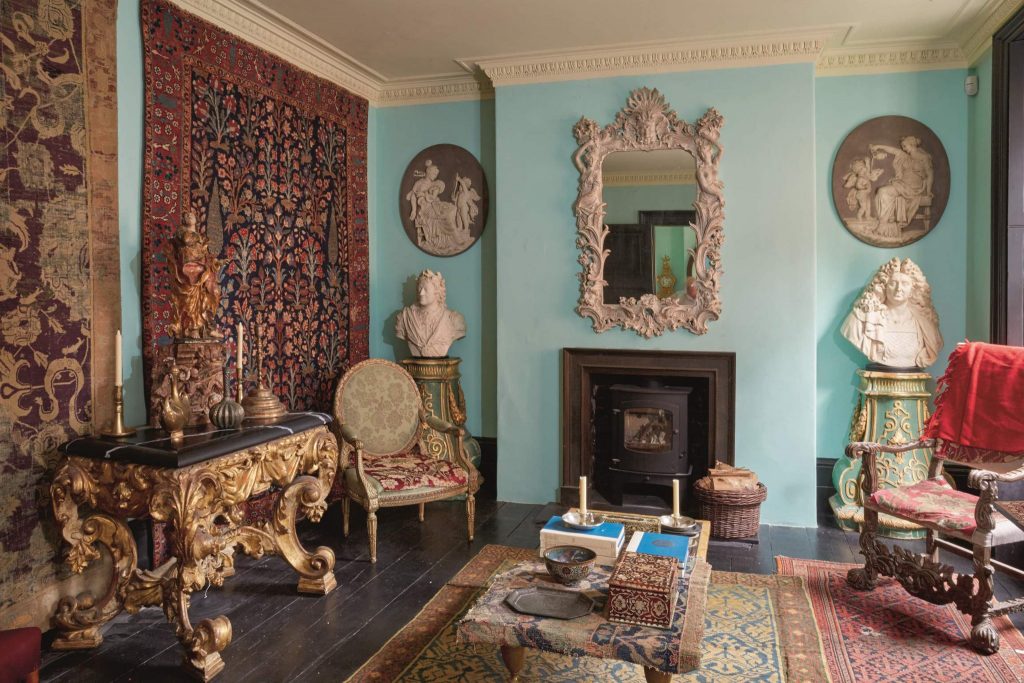 So it comes as a surprise to discover that Mr. Hodgkin’s home near the British Museum in London was the opposite of a minimalistic interior — it was a treasure trove of ornate antiques from around the world. There were 17th-century Persian rug fragments, Iznik tiles, an 18th-century Italian console table, Indian miniatures, baroque wall mirrors, and even more unexpectedly, he collected the flags of countries ranging from Botswana and Swaziland to Norway, New Zealand and the United States.

On Oct. 24, Sotheby’s in London is auctioning more than 450 items from Mr. Hodgkin’s collection (flags included) in a sale estimated to bring in between £2.5 million and £4 million ($3.4 million and $5.4 million). Mr. Hodgkin left a letter asking that his executors give away large sums after his death, so the auction will raise money for that gift.

Among the priciest items in the sale are paintings by Patrick Caulfield and Bhupen Khakhar, Mr. Hodgkin’s friends and fellow artists.

As a collector, Mr. Hodgkin “wanted the shot to the heart: something that stood out from the formula,” said his partner, Antony Peattie, a music writer who lived with him for 33 years in the house on Coptic Street. “What appealed to Howard was when it broke away from the norm, when it was an extra something or other.”

He talked about the artist’s affection for “two very curly bits of ornament that might have been pew ends” and that were “very odd.”

Mr. Peattie said it was “very hard to bear” returning home after his partner’s funeral. “The objects were there, and he wasn’t,” he said. “To live in the same surroundings was to pretend that nothing had changed. But everything had changed.”

“I had to start again. I got rid of a lot,” Mr. Peattie said, adding that the house now looked “totally different,” with just a few textiles, tiles and rugs.

The house in Bloomsbury was fairly Spartan at first. “Things came, things went, over the years: It got denser as he acquired more things,” said Jackie Coulter, a senior consultant at Sotheby’s on rugs and carpets, standing among Mr. Hodgkin’s lifelong possessions in a Sotheby’s warehouse. “As time went on and his paintings started to sell for higher prices, he had the wherewithal to collect in the way that he wanted to.”

Ms. Coulter met Mr. Hodgkin in her late 20s, when she became his office assistant while working part-time for Sotheby’s. Over time, she became a friend and a regular dinner guest, socializing with authors, poets and theater designers. At any given moment, she said, there would be eight or 10 rugs (or fragments of them) hanging on the walls of the house, and less-precious ones covering the floor.

A star lot of the Sotheby’s sale is a fragment from the so-called Von Hirsch Garden Carpet — a carpet from 17th-century Iran that was divided into four pieces and that collectors including Mr. Hodgkin coveted. His fragment, which (unusually for a 17th-century Persian carpet) featured a palm tree, hung opposite star-shaped tiles from the Iranian city of Kashan, Ms. Coulter said. It is a mong the pricier items in the auction, estimated at £80,000 to £120,000.

“When he looked at things, he looked at things with his own eye: he didn’t need me to tell him what he wanted to look at,” she said. Ms. Coulter added that she regularly sent him images of carpets “in the hope that I might have hit the nail on the head.”

Among the most affordable items in the sale (estimated at £400 to £600) are the flags, which, according to Mr. Peattie, were kept in cupboards most of the time, except when placed on the lawn of the artist’s country house in Normandy, where they could be looked at from above. “He didn’t mind that they were in ropy condition,” Mr. Peattie said.

“Flags show how color and form can tell a story, and carry an immense emotional weight,” Mr. Peattie explained. “He was fascinated by the sensation of national feeling.”

Mr. Hodgkin also collected works by his artist friends. One was Mr. Caulfield. Mr. Hodgkin described their relationship as “the closest I ever came to having a painter colleague.” The sale contains two Caulfield works — a cutout painting of a dark purple jug, the back of which has an affectionate dedication to Mr. Hodgkin; and “Sweet Bowl,” a bowl of sweets (estimated at £300,000 to £500,000).

Another major painting in the sale is by Mr. Khakhar, an Indian artist who was championed by Mr. Hodgkin. “De-Luxe Tailors” (1972) was included in Tate Modern’s 2016 retrospective of Khakhar works. Estimated at £250,000 to £350,000, it shows the interior of a tailor’s workshop and is a play on perspective and scale.

“Not only did he have paintings by these friends, but Howard painted all these friends,” said Frances Christie, head of the modern and postwar British art department at Sotheby’s. “Friends were really important: They were his subjects.”

Asked if he would attend the auction, Mr. Peattie said he was flying to New York that very day. “I’ll see the viewing, and I look forward to that,” he said, “but I won’t be urging people to bid higher.”