The art of buying a carpet

A handmade oriental rug is the ultimate travel trophy, but if you do not want to be ripped off, it helps to know what to look for. 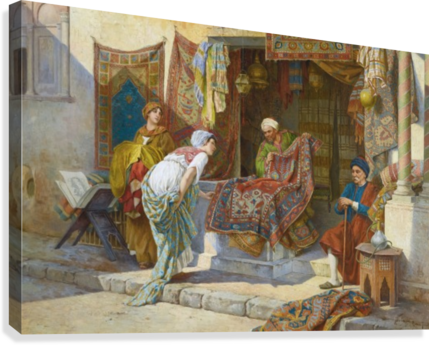 Never mind a mounted warthog head or wobbly waterpipe, for me a handmade carpet is the supreme travel trophy. The interweaving of exoticism, age-old skill and sheer prodigious effort make their selection, acquisition and, finally, possession a rare thrill. But, like most alluring things, bagging a good carpet is not easy and far too many travellers find that, instead of returning home with a length of treadable magic in their luggage, they have been taken for a ride.

There are two schools of thought about oriental carpet buying. The first, the one expounded in many guidebooks, holds that casual carpet buyers will inevitably get ripped off and that, given the gaping economic disparity between the West and the carpet-making rest, the damage will be slight – and perhaps even a justified kind of post-colonial revenge. The second sees the exchange between you and the carpet dealer as akin to a barely disguised duel.

Where to buy it

The former Persia remains the most prolific and varied source of carpets in the world, as well as possessing the most exquisite instances of the art form. Iran is also the origin of most of the designs made elsewhere. This does not mean that carpets from Turkey, India, China, Morocco, Pakistan, Afghanistan, the Caucasus or Romania are inferior; sometimes, in their robustness and clarity, they are superior to the prototype.

They do not, however, all make for an easy shopping trip (it is safe to say Afghanistan will be on the itinerary of only those most seriously smitten with the carpet bug) and the bulk of travellers who buy a carpet will do so while holidaying in the more popular destinations.

In such cases, the first rule is to avoid carpet boutiques in the big cities; leave them to the idle rich and instead head for the source. My recent seven-hour coach trip south of Istanbul to the dusty town of Ayvacik, one of the centres of the natural dyeing renaissance in Turkey, might have seen me, due to the disdainful rural Turkish sense of time, miss my return flight, but I did get my shimmering blue and saffron rug – and, at £150, for about one-third of the price I would have paid at one of the tourist traps in the old Ottoman capital.

The city of Konya, in central Turkey, is another vegetable dyeing hotspot, complete with home-grown whirling dervishes. In India, visit Agra or Jaipur or scour the villages of Mirzapur – the source of about 90 per cent of Indian carpet production. In China, make for the cold north where simply designed – but symbolically rich and masterfully coloured – carpets are plentiful: Beijing remains the centre of the trade.

In Morocco, spurn Marrakesh for the market village of Azrou nearby and abandon Fes, thick with carpet sharks, for the lesser imperial city of Meknes, an hour away. I doubted I would ever find my way out of the Meknes medina – the labyrinthine market in the west of the city that was the base of the great, bloodthirsty 17th-century sultan Moulay Ismail – nor even survive my fraught, hours-long bargaining session in the carpet souk. But survive I did and, on my cramped ride back to Fes in a shared grand taxi, mesmeric Muslim devotional music flooding from one passenger’s portable stereo, I felt triumphantly that I had secured the carpet heavy on my lap for more or less what it was worth (although the grins on the face of the dealer and his chubby son and protégé as we shook hands did perhaps suggest rather more than less).

What to look for

‘Knowledge is power,’ writes Janice Herbert in her guide to oriental rug buying, and it is worth acquiring some of the former through reading or consultation before you travel. Many amateur buyers fall foul of the initial hurdle, that of definition, and end up with a machine-made carpet – the antithesis of the pre-industrial, painstaking originality that is at the heart of a handmade carpet’s desirability. Pay close attention to the following three factors and you are less likely to be led astray.

An oriental, or ‘exotic’, carpet, rug or prayer mat means one of natural fibres that has been hand-knotted or hand-woven on a loom – it means nothing else. You will find much truth under the carpet: turn it over, in the dealer’s shop and look at the reverse. The knots on a machine-made carpet will be suspiciously uniform. Knot count is also often posited as a determinant of quality, and while it is not infallible – some valuable contemporary designs are very coarsely knotted – a good rule of thumb with traditional rugs, at least, is to look for upwards of 120 knots a square inch.

Discovering your ‘silk’ carpet is boiled cotton rather strips it of its lustre. The guidebooks often suggest the ‘burn’ test not only to ascertain the fibre but also, hopefully, to trick the dealer into thinking you are other than a carpet buying naive. The latter is now a forlorn hope – some dealers are so used to the request they virtually whip out the matches before you cross their portal – but you should still ask to burn an unpicked knot or snippet of fringe: silk and wool smoulder whereas their substitutes will catch alight.

While artificial dyes are no reason not to set foot on a carpet, they can never match the earthy evocation of their natural alternatives: among them cochineal red, from the crushed, dried insects, blue from the indigo plant, henna orange, hollyhock purple, pomegranate yellow and gallnut black. How to tell the difference? Rachel Bassill, a London carpet dealer who runs The Rug Studio, says natural dyes ‘should be as bright and rich in colour as a bunch of flowers. There shouldn’t be any one colour fighting for attention.’ Avoid ‘hot’ colours, she advises, such as ‘a red that’s as hot as a tomato. If it’s the red of a tulip, then that’s a vegetable dye colour.’ Oranges and hot pinks will definitely be chemical dyes, she says. The dyes also differ in the way they penetrate the fibre. Bend the carpet so as to expose individual threads from the base to the tip. Synthetic dyes will colour them evenly whereas natural ones tend to show variance.

‘You’re insulting me!’ The carpet dealer’s ubiquitous refrain but one that still bamboozles many Westerners into a bad buy. You should view haggling with clinical detachment: the dealer’s affrontedness is not what it seems but simply a tried technique of exploiting your embarrassment to his advantage. Rachel Bassill offers some of the best advice. ‘Turn the tables,’ she says. ‘Tell them, “No. You’re insulting me!”‘ You will be one step closer to a relatively painless purchase of that object you desire.